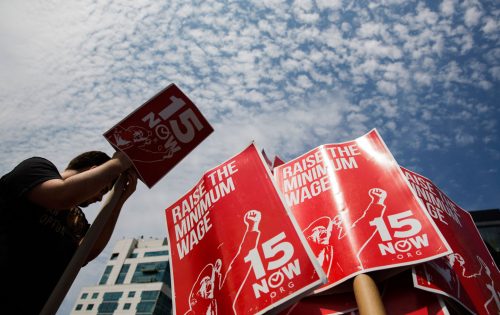 ALIGN and members of our long-standing alliance are fighting for the rights of workers in the low-wage economy, where rapid automation is further eroding workers’ economic security.

New York is a city of extremes, including extreme inequality.  Over half (52%) of Hispanics, 41% of blacks and 32% of whites in New York City earn less than $15 an hour, many of them in New York City’s ’s fastest-growing industries such retail, healthcare, and food service.  Meanwhile, it’s precisely the low-wage sector that stands the most to lose as automation extends ever-greater influence over the world of work.

Despite extreme inequality, New York has always been a city that fights back — a city of labor, where workers organize to win victories at scale.  Community organizations and labor unions have come together for major wins.  For example, ALIGN played an important role in the Fightfor15, which won a guaranteed $15 wage for restaurant workers.  In 2018, fair scheduling came into effect, requiring employers to let employees know their schedules two weeks in advance.  Victories like these are the result of sustained, strategic organizing.

ALIGN and members of our long-standing alliance are driving campaigns and activating members to fight for workers in the low-wage economy.  Our goals are to: