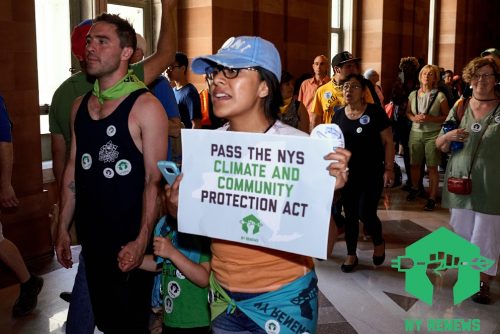 Days after world leaders in Paris reached a historic global climate agreement in December 2015, a statewide movement was launched for the purpose of bringing good jobs and clean energy to New York. Through a powerful and diverse alliance of community-based organizations, environmental justice groups, labor unions, faith groups, business leaders, and other advocates from across the state, NY Renews is calling on Albany to make New York State’s climate commitments legally enforceable, ensure accountability, establish a just energy policy, and create clean energy jobs throughout the state.

NY Renews forged a formidable statewide coalition that led to the creation of the Climate and Community Protection Act. The New York State Assembly passed this bill during the 2016 legislative session, and Think Progress  noted it as one of the most ambitious climate bills in the country, one that would require the state to reduce greenhouse  gas emissions from major sources to zero by 2050.

NY Renews continues its exciting work engaging communities and building a broad base of support across the state. With over 90 organizations that are part of NY Renews, the coalition is currently focused on making the Climate and Community Protection Act a reality in 2017.

Learn more about the NY Renews coalition and our work at nyrenews.org.