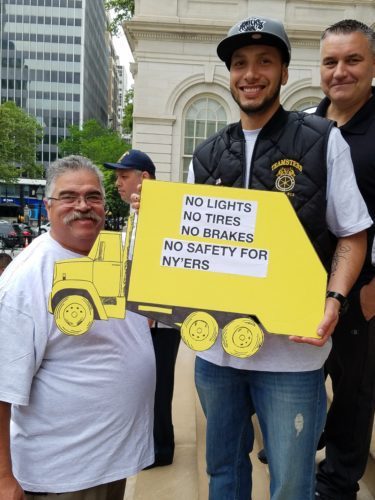 The commercial waste industry in New York City is highly polluting, inefficient, and disproportionately impacts  communities of color and workers. The vast majority of waste is transported by heavy trucks to and from waste transfer stations in a handful of low-income communities and communities of color. Many workers in the commercial sector are paid poverty wages and lack benefits and full-time, permanent jobs. Plus, New York City landfills and incinerates the majority of its commercial waste even though that waste could be recycled or composted.

New York City deserves better. By transforming the commercial waste industry, the Transform Don’t Trash NYC campaign aims to reduce pollution, foster cleaner and healthier communities for all New Yorkers. ALIGN is uniting labor, environmental justice, community and other advocates to raise accountability and standards in commercial waste that will save the City money, lift thousands of waste industry workers and their families out of poverty, and create new, quality jobs in recycling and recycling-reliant industries.

In the Fall of 2019, The Transform Don’t Trash coalition passed the Commercial Waste Zones bill, now local law 199,  through the City Council.  The law will establish Commercial Waste Zones for trash collection, which will utilize a competitive bidding process to select commercial haulers to service franchise zones established across the city.

This franchise system would ensure high-road environmental and labor practices, halting the current race to the bottom in the private waste sector. Franchise awardees will be required to meet environmental standards that increase recycling rates, reduce truck emissions, and more equitably distribute waste handling across the city; to meet labor standards that improve the safety and quality of jobs; and to ensure the new recycling jobs that are created are good jobs. In return, franchisees will benefit from a steady, efficiently located base of customers. The franchise system will ensure accountability through reporting requirements and increased City oversight.

In the coming months, the Transform Don’t Trash campaign plan to work with the city on the implementation process to make sure that Environmental justice standards, worker protections and safety standards are as strong as possible.

For more information on Transform Don’t Trash, check out our website: transformdonttrashny.org