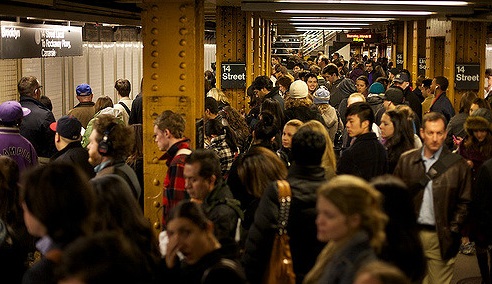 New York’s transportation infrastructure is broken.  Women, immigrants, black and low-income New Yorkers bear the brunt of this, as they are the most dependent on public transportation.  Subway delays have tripled over the last five years, which means lost income for hourly-wage workers, harm to health from stress, and a dent in the New York economy as a whole.

New York City’s bus system is no better.  Buses move at slow speeds, service is unreliable and ridership is declining.  In many ways, however, the bus system is the future of New York City’s ’s public transit.  It connects people to jobs in NYC’s fastest growing industries such as health, education, food services, culture and hospitality that are spread throughout the outer boroughs.  Low-income New Yorkers depend on our bus system the most, with the average bus commuter earning $28,455 (compared to $40,000 for subway riders).

While low-income New Yorkers pay the price of our crumbling transportation infrastructure on a daily basis, wealthy New Yorkers still find a way to profit from it.  Major banks profit from the MTA’s debt financing, while rich real estate developers reap the benefits of MTA upgrades that prioritize high-income neighborhoods.

Meanwhile, transit is the second highest contributor to climate change in New York City, after buildings.  Almost a third of the city’s greenhouse gas emissions come from transit, particularly from private vehicles which congest our streets, and from diesel-powered buses.

This crisis presents an important opportunity to transform our transportation system for the better, in a way that confronts systemic inequality and the growing risk of climate change head-on.

ALIGN is bringing members of its long-standing alliance – community organizations, labor unions, worker centers, and environmental groups – together behind powerful campaigns to revolutionize our public transportation system.  For a challenge this big that has implications for all New Yorkers, the only way forward is to organize at scale and unite groups across the City and State. Our Priorities: 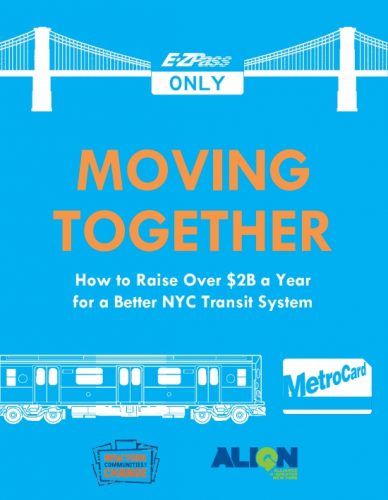 Nothing will improve until the City and State put their differences aside and generate sufficient long-term funding sources for our crumbling transportation system.  The subways alone need aninvestment of $800 million for short term repairs, and $8 billion for longer term fixes. We are standing with others and organizing at the grassroots to advocate for ground-breaking policies such as the Fix NYC congestion pricing plan, which will generate $1.5 billion a year in revenue, while reducing congestion and climate pollution.  ALIGN is also exploring additional progressive policies to generate funds for transit and re-invest them in the communities where the need is greatest.

When new revenues come through, low-income New Yorkers must get a break: we’ve endorsed the Fair Fares campaign which would give adults at or below the federal poverty line discount price MetroCards.

Check out our report, “Moving Together: How to Raise Over $2bln A Year for a Better NYC Transit System”.

The New York Metropolitan Transportation Authority maintains the largest bus fleet in North America: their 5,700 vehicles serve an average of 2.4 million people a day in all five boroughs. Just imagine if all those buses were run on clean fuel!  Currently the fleet includes diesel, hybrid diesel, and compressed natural gas (CNG) buses. Switching all the buses to electric would save over 575,000 metric tons of CO2 equivalent a year. Each bus that’s converted will save the city $150,000 in annual medical costs.

Co-ops represent a fair economy, in which all workers have an equal stake in its benefits, instead of senior executives of wealthy corporations.  We are working with partners to create a precedent-setting electric school-bus co-op, which would be owned by school bus drivers and have parents, teachers, and workers on a democratically-elected board.