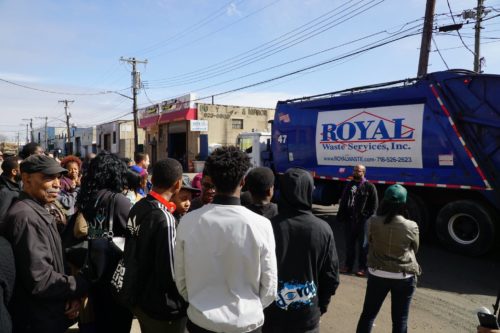 On Saturday February 25th the Transform Don’t Trash coalition mobilized a local faith community for a “Toxic Tour” of waste transfer stations in Southeast Queens: the sites where garbage is transferred from collection trucks onto the next stage of its journey to landfill.

Three neighborhoods in the city receive 75% of its waste. This kind of distribution is not just unequal, it is inequitable.

The foul stench emanating from city transfer stations is a major nuisance for local residents, but more importantly they are a health hazard.  Based on ALIGN’s research, city garbage transfer stations have levels of asthma-inducing pollutants up to seven times higher than the average for the surrounding area.

Coupled with the high volume of truck traffic caused by the stations and the CO2 they release into the air, the local community is saddled with unhealthy living conditions.

Dubbed the “Pray In,” over 40 faith members toured multiple commercial waste stations located across the street from residents and a park.  Participants included residents, faith members, waste workers, and elected officials who were there to discuss the problems arising from the concentration of waste stations.

It’s not just the communities who are saddled with problems.  Workers who were part of the tour described the unsafe trucks they drive while carting waste: ALIGN has reported extensively on this subject.

Reverend Andrew Wilkes of the Greater Allen A.M.E., who organized the Pray In with ALIGN, emphasized workers’ safety, and how New York City’s communities of color are saddled with a disproportionate amount of the city’s trash burden.

The Toxic Tour is an example of a long-term organizing effort by ALIGN.  Although the city has agreed to shift the commercial waste industry over to a zoned collection system, full implementation is expected to take up to six (6) years.

While the city develops its zoned system the TDT coalition’s on-the-ground mobilization of local residents is paramount to ensuring the most equitable system is in place.  This means building a base of affected community members and workers in the neighborhoods around the city that are affected by this issue, in partnership with our long-standing allies in labor and community.  Together, this campaign will continue to push officials on designing a zoned system that keeps workers safe and communities healthy.