CLIMATE WORKS FOR ALL 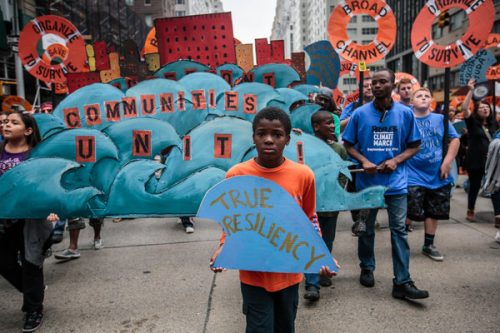 Climate change continues to have severe and long-term effects on New York City residents. Although all New Yorkers will be impacted, low-income residents will disproportionately shoulder the burdens created by this crisis. Low-income communities sit at a nexus of physical, political, and economic forces that leave them most vulnerable to extreme weather events and other impacts of climate change.

While daunting, this challenge presents an unprecedented opportunity to make significant progress towards a more just, “living” economy in NYC that ensures families and communities have access to high quality career-path jobs, sustainable and healthy neighborhoods, and ultimately, social equity. But a “living” economy will only be realized when our city places equity goals at the center of government actions aimed at reducing greenhouse gas emissions and adapting to a changing climate.

We have seen the transformative impacts of post-Sandy climate resiliency investments when they are focused on achieving community benefits – to date, NYC has placed over 3,700 flood-zone residents into rebuilding jobs and placed over 100 Sandy-impacted residents into union pre-apprenticeship programs.

After the People’s Climate March, we applauded the response by the Mayor and City Council to set goals of reducing greenhouse gas emissions by 80% by 2050, achieving zero waste to landfills by 2030, and installing 100 megawatts of renewable energy on public buildings by 2025. But we know that bold climate goals must be implemented in conjunction with equally ambitious equity goals in mind. Soon after the People’s Climate March, the newly formed Climate Works for All coalition of labor unions, community groups, environmental justice organizations, and other allied advocates released its first report, Climate Works for All: A Platform for Reducing Emissions, Protecting Our Communities, and Creating Good Jobs for New Yorkers [link to report], that details ten proposals to make our city more resilient, create nearly 40,000 good jobs each year, and cut our annual greenhouse gas emissions by nearly 12 million metric tons of carbon equivalent. 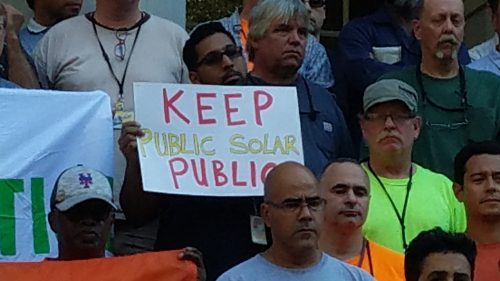 Currently, Climate Works for All is spearheading a campaign called the Public Power Project to transform the way that New York City transitions to a renewable energy future. The coalition launched the campaign with a white paper report, Restart Solar: How NYC Can Restart Its Solar Program to Benefit Workers and Community, [insert link], to call for changes to the city’s public sector solar program that will directly result in investments and benefits to working people and our communities. The following shifts to the city’s current approach to implementing renewable energy on public buildings, such as schools and hospitals, will lead us to greater equity in one of the most unequal cities in the United States. Key goals of the campaign include: 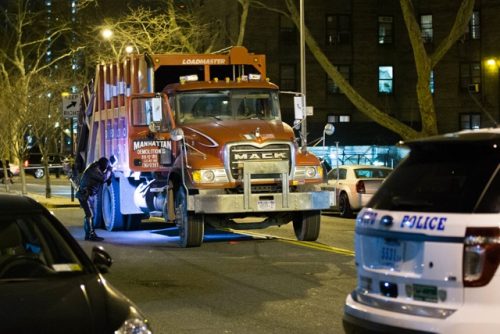 The commercial waste industry in New York City is highly polluting, inefficient, and disproportionately impacts  communities of color and workers. The vast majority of waste is transported by heavy trucks to and from waste transfer stations in a handful of low-income communities and communities of color. Many workers in the commercial sector are paid poverty wages and lack benefits and full-time, permanent jobs. Plus, New York City landfills and incinerates the majority of its commercial waste even though that waste could be recycled or composted.

New York City deserves better. By transforming the commercial waste industry, the Transform Don’t Trash MYC campaign aims to reduce pollution, foster cleaner and healthier communities for all New Yorkers. Align is uniting labor, environmental justice, community and other advocates to raise accountability and standards in commercial waste that will save the City money, lift thousands of waste industry workers and their families out of poverty, and create new, quality jobs in recycling and recycling-reliant industries.

A zone system for commercial waste collection would utilize a competitive bidding process to select commercial haulers to service franchise zones established across the city. The franchise system would ensure high-road environmental and labor practices, halting the current race to the bottom in the private waste sector. Franchise awardees would be required to meet environmental standards that increase recycling rates, reduce truck emissions, and more equitably distribute waste handling across the city; to meet labor standards that improve the safety and quality of jobs; and to ensure the new recycling jobs that are created are good jobs. In return, franchisees would benefit from a steady, efficiently located base of customers. The franchise system would ensure accountability through reporting requirements and increased City oversight.

Due to the ongoing work of the Transform Don’t Trash campaign, this summer the Mayor’s office and Department of Sanitation announced that New York City will now begin moving to a new system of commercial waste zones. A new City study by the Department of Sanitation found that, under this system, NYC can reduce truck traffic and diesel emissions, raise recycling rates, address environmental injustice, and protect private sanitation workers.

In the coming months, the Transform Don’t Trash campaign plans push for stronger measures to recognize issues of race inequity in low income communities of color as well as work with the city to  implement the new system.

Sign up here for e-alerts about Transform Don’t Trash

ALIGN was formed and continues to be built on the principle of solidarity—“being there” for someone else’s struggle as well as your own. For nearly two decades now, we have “been there” for people who are fighting for their rights in the workplace and for more livable communities. We frequently lend our support and work in coalition with other organizations on campaigns that build the movement for social and economic justice. ALIGN is also part of the Fight for $15 and played a role in leading actions in solidarity with tens of thousands of fast food workers in more than 200 cities across the United States on April 15, 2015.

Days after world leaders in Paris reached a historic global climate agreement in December 2015, a local movement formed to bring good jobs and clean energy to New York state. A powerful and diverse new campaign launched with the goal of passing ambitious climate solutions in the upcoming legislative session in Albany.

NY Renews forged a formidable coalition that led to the creation of the Climate and Community Protection Act. The New York State Assembly passed this bill, and Think Progress noted it as one of the most ambitious climate bills in the country, one that would require the state to reduce greenhouse gas emissions from major sources to zero by 2050.

NY Renews is working on continuing to build a broad base of support and community engagement, as well as create campaigns to identify the best policies to support NYC’s growing renewable energy economy.

Sign up here for action alerts about NY Renews

REAL AFFORDABILITY FOR ALL

New York City is at a breaking point. Nearly half of all residents are living near the poverty line. While real wages have been depressed for the majority of New Yorkers, housing costs are soaring. Over the past ten years, rents have increased at twice the rate of household incomes citywide. At the same time, the number of rent-regulated apartments has been steadily declining, and most new housing construction has been geared toward the rich, which has caused neighborhood displacement and record levels of homelessness.

ALIGN joined the Real Affordability for All Coalition along with tenant associations, community organizations, faith groups, immigrant advocates, and others to urge the city to preserve and create real affordable housing, and to ensure that new affordable housing development creates good local jobs.

Both de Blasio’s Mandatory Inclusionary Housing (MIH) and Zoning for Quality and Affordability (ZQA) are intended to boost the supply of affordable housing across the city.

As this process unfolds, we need additional tools to reach affordable and stable housing for communities. Communities should be able to withhold extra density that would allow for taller buildings until developers agree to build deeply affordable housing, hire local workers, and provide training through designated apprenticeship programs.  Apartments for residents making below 30% of the area median income (AMI) should be prioritized alongside career-track jobs for low-income NYC residents. Many more New Yorkers should be able to gain access to apprenticeship opportunities and new careers building apartments they can afford.

The Real Affordability for All campaign is currently in the process of supporting local fights on zoning issues while developing a citywide campaign.