Trump’s agenda poses a direct threat to workers, immigrants, people of color and the planet.  There’s an urgent need to build strong alliances to challenge his regressive policies.

ALIGN is doing just that.  Using our strategies of coalition and movement-building, research and policy advocacy we are fighting for progress in New York City at the intersection of a healthy Environment, a fair Economy and racial Equity.  These three priorities were lifted up in the first part of 2017 through Martin Luther King Day, the March for Climate, Jobs and Justice, and May Day.

Here are just a few highlights from our work in the past months.

Tackling climate change and creating the climate careers of the future 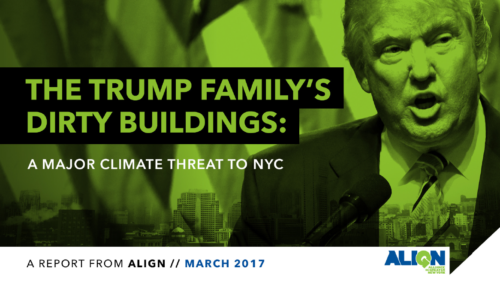 With a climate change denier as head of the Environmental Protection Agency and a proposed massive cut of 31% to the agency’s budget, New York City must fight back.

On April 3, we launched our report “The Trump Family’s Dirty Buildings: A Major Climate Threat to New York City”, which showed that buildings owned by Trump and his son-in-law Jared Kushner are some of the city’s biggest polluters.  Big buildings account for over 75% of the city’s greenhouse gas emissions.  Requiring energy efficiency retrofits by private big buildings will be an essential step if the city is going to fulfill its commitment to reduce emissions by 80% by 2050.

As our Executive Director Maritza Silva-Farrell wrote in Crains, improved energy efficiency will also “create thousands of higher-wage positions for immigrants, people of color and women – the folks most affected by Trump’s reactionary agenda.”

In an important announcement on Earth Day, Mayor de Blasio and the Building and Construction Trades Council launched the NYC Green Jobs Corps.  This expands on the success of the ground-breaking Sandy Build it Back program in which ALIGN played an instrumental role, and it reflects our priority of strengthening trade union action on climate change.  The Green Jobs Corps will train 3,000 New Yorkers in skills such as retrofitting buildings over the next three years.  Through the program, more New Yorkers will have the opportunity to access career-track jobs while fighting climate change.

Bringing the momentum from the March for Climate, Jobs and Justice to NYC

ALIGN and a coalition of other social justice and environmental organizations in the city will translate the energy from the March for Climate, Jobs and Justice in Washington, D.C. (where our team represented!) into ongoing political impact in New York City.

The Climate, Jobs and Justice Accountability Forum on 16 May will be a mass people’s interview of citywide elected officials.  It will be an opportunity to learn about how the officials intend to address climate change in the city while creating good jobs.  It will focus on the need to mandate energy efficiency improvements, transform the commercial waste industry, and divest the city’s pension funds from fossil fuels. 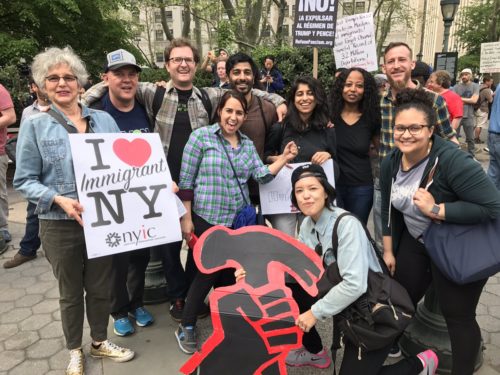 May Day had extra significance this year, as workers’ protections are rolled back and immigrant workers face unprecedented threats.  ALIGN joined allies in actions throughout New York.  These included a protest outside JP Morgan and Wells Fargo (two of the companies that are profiting from Trump’s anti-immigrant, anti-worker agenda), the Immigrant Worker Justice Tour, and the Rise Up rally in Foley Square. 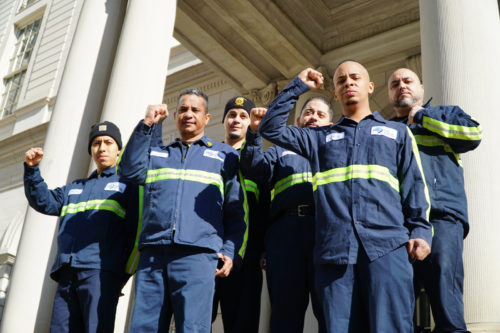 The private waste industry in New York City runs like the “wild, wild west,” as a recent El Diario story on our Transform Don’t Trash campaign highlighted.  Sanitation workers – most of whom are people of color and immigrants – are exploited.  And just three neighborhoods in the Bronx, Brooklyn and Queens receive 75% of the city’s waste for processing, bearing the brunt of the pollution, noise, and health impacts.  All three neighborhoods are predominately made up of residents of color.

The TDT campaign has scored important wins.  Following a hearing at City Hall where ALIGN testified, brave workers from SIMs Municipal Recycling plant at Sunset Park in Brooklyn voted to join Teamsters local 210, demonstrating that waste industry jobs can become high-quality green jobs.  In SE Queens, we worked with Reverend Andrew Wilkes of the Greater Allen A.M.E. as well as TDT partners NYC Environmental Justice Alliance, New York Lawyers for the Public Interest and Teamsters to mobilize the faith community and other local residents for a “Toxic tour” and Pray In – actions that elevated the struggles of residents next to a waste transfer station.

ALIGN is pleased that the Mayor’s recent update to the “OneNYC” plan specifically refers to shifting the private waste industry to a zoned collection system.  We have pushed for this because it will relieve the pressure on communities and strengthen worker protections.  While the city develops the zones, the TDT coalition’s on-the-ground mobilization of local residents is essential to ensure the most equitable system is in place.

Save the Date! 2017 ALIGN Movement Builders Awards to be held September 26! 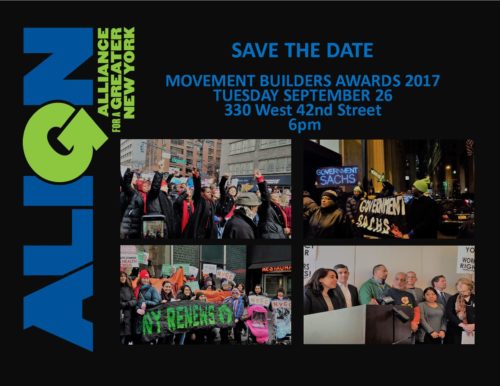 Inspired by what you have read?  On September 26 ALIGN is holding our annual Movement Builders Awards.  This is an opportunity to recognize and celebrate inspiring leaders from labor and community: their work for equity is needed more than ever at this time.  Keep posted for the announcement of the awardees and details on how to attend.