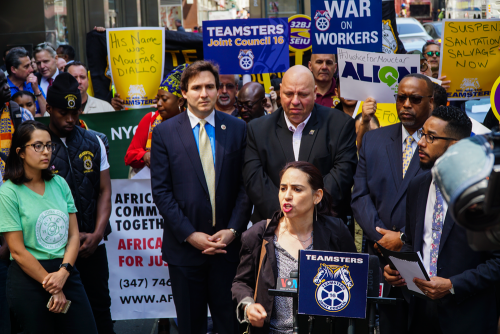 Here in 21st Century New York City, immigrant workers are still dying on the job. Twenty-one year-old Guinean immigrant Mouctar Diallo was killed under the wheels of a Sanitation Salvage truck in the Bronx, as he worked as a helper picking up garbage. For months his death was covered up. The Transform Don’t Trash coalition is advocating for justice for workers and transformation of the invisible night-time commercial waste industry. Sanitation workers, African immigrant community organizations and City Council members came together to call on the city to revoke Sanitation Salvage’s license, and to follow through with systemic reforms in the form of exclusive commercial waste zones.

Diallo’s tragic death is part of a much wider picture of economic and racial injustice for the industry’s predominately black and Latino workforce. Writing in New York Daily News, our Executive Director Maritza Silva-Farrell highlighted that these were the very factors that led sanitation workers in Memphis to strike fifty years ago, and Martin Luther King to join them the day before his assassination. Hazardous conditions for workers are closely related to safety risks for everyone who uses our streets. In April, Transform Don’t Trash published a report showing that crashes involving private waste trucks, including fatal crashes, have doubled over the past two years. 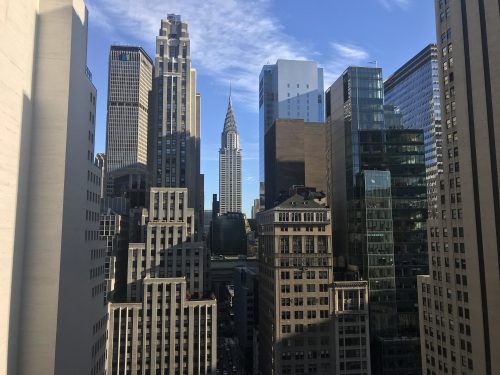 The Climate Works for All Coalition is building power across New York City to pass a groundbreaking policy that will reduce emissions from the city’s biggest buildings while protecting affordable housing. Buildings account for nearly 70% of the greenhouse gas emissions in our city. Through trainings and actions – with members of environmental justice groups, climate groups, community organizations, union members and housing advocates – we are mobilizing to make sure the NYC Council introduces the strongest possible policy on retrofits. This will spur progress towards the city’s 80X50 climate target, protect affordable housing and create good jobs. So far 1000 activists have signed a letter to the NYC Council Speaker urging bold action this year.

At the state level, we are working as part of the New York Renews coalition to win some of the country’s boldest climate policies: for a rapid and just transition to renewable energy in New York State, and to secure revenue through a penalty on corporate polluters. The revenue will be invested in renewable energy, protecting workers currently in the fossil fuel industry, and creating the climate careers of the future. 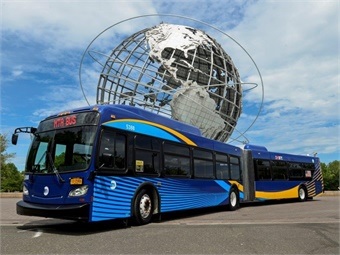 Transit is NYC’s second highest source of carbon emissions after buildings – contributing to climate change and pollution that harms the health of workers and riders. ALIGN and our allies from NYC-EJA, Sierra Club, Jobs to Move America and Tri-State Transportation Campaign issued a joint press statement supporting the recent MTA Bus Action Plan. The announcement included a commitment to transition its 5,000 bus fleet to 100 percent zero emissions electric buses, with the goal of a zero emission bus fleet by 2040. 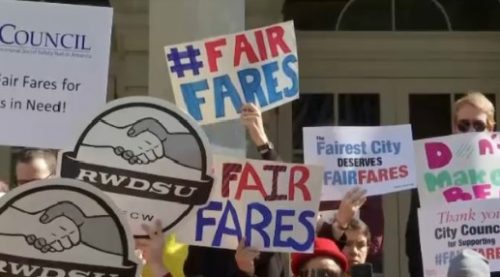 A quarter of working-age poor New Yorkers – those with an annual income of $12,752 for a single person or $19,749 for a family of three – regularly cannot afford bus and subway fares.  ALIGN is part of the Fair Fares coalition, which saw a major win in June when the city agreed to include an initial six months of the program in its budget.  The initiative will cover the cost of half fares for city residents aged 18 to 64 in households at or below the poverty line.

As Maritza wrote in an op-ed in Crains: “On top of juggling the rising cost of rent, health care, child care and food for their families, New Yorkers in low-wage industries should not have to struggle to pay for travel to and from work…This hits blacks, immigrants and women- who are disproportionately represented in low-income jobs and reliant on public transit – hardest. A third of working-age women in poverty say they struggle to pay bus and subway fare.”

May Day 2018: A unified call for immigrant and worker rights 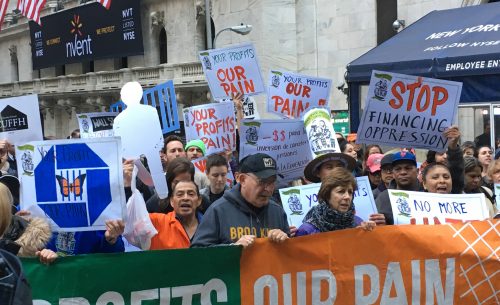 May Day is historically the day when workers unite across boundaries to stand together and defend their rights. It had all the more urgency this year, in light of unprecedented attacks on workers and immigrants – at their workplaces, in their homes, and on the streets. We joined labor and immigrant organizations from our long-standing alliance to lift up the message loud and clear, that immigrant and workers’ rights go hand in hand.

As Maritza said to the crowd at the #PartnersinPower rally: “The federal government is attacking our communities, our families, our future. We have a big fight ahead of us. How do we win? Solidarity! When we are united, that is how we win.”

Earlier that day we were outside the Stock Exchange with the Corporate Backers of Hate campaign, calling on Chase, Wells Fargo and BlackRock to stop bankrolling the private prison and immigrant detention system.

Technology giants like Amazon have an ever-growing footprint on the world of work and the character of our cities. In April, we organized an action at Amazon Books on 34th Street, where community members called on the tech firm to pay its fair share of taxes, invest in local communities and respect workers as it expands in the city. Regardless of whether Amazon locates its second headquarters here, Amazon has already received over $1.2 billion in taxpayers’ money to grow in NYC. Meanwhile, it paid zero in federal taxes last year.

Save the date for the Movement Builders Awards

The ALIGN Movement Builders Awards will be on October 11! Join us as we celebrate outstanding leaders at the forefront of racial, gender, and economic justice as innovators, protectors, and trailblazers. 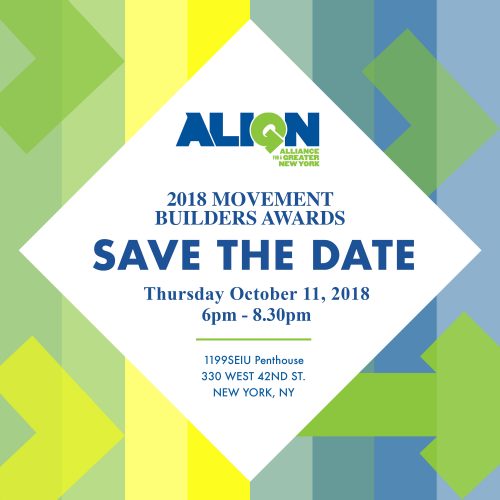