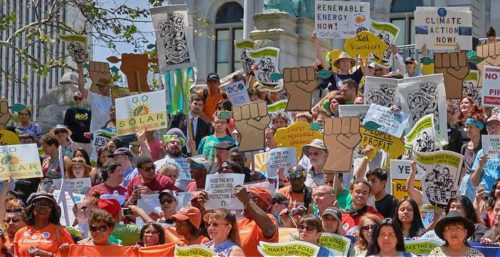 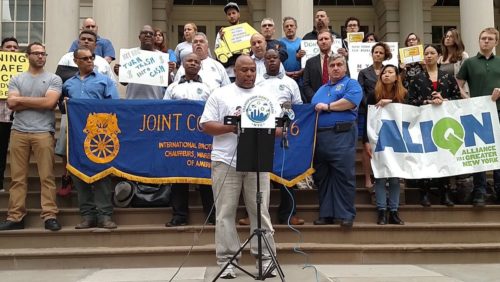 After four years of campaigning by the Transform Don’t Trash (TDT) coalition, ALIGN, and its allies achieved an agreement with Mayor DeBlasio and the Department of Sanitation to implement commercial waste zones. By shifting the NYC private sanitation industry over to a zoned collection system, the city will see a reduction in harmful truck emissions, increased recycling and landfill diversion, and improved working conditions and wages for over 3,000 workers. Prior to this agreement, the industry was rife with dangers that not only put workers and the public at risk but particularly exploited workers and communities of color. This shift was the result of years of advocacy by TDT, where ALIGN spearheaded community forums, rallies, published four reports, and held meetings with local officials. With full implementation set to take place in approximately six years, TDT will be working to ensure the zoned system is implemented as an equitable system that meets the needs of workers and residents of all socio-economic backgrounds. 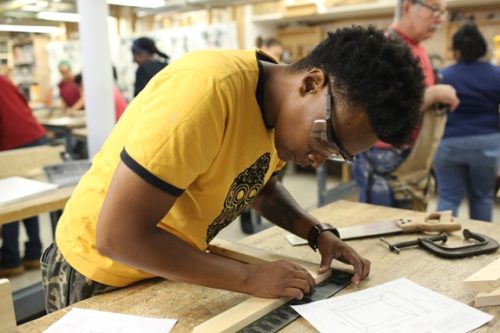 Following the devastation of Hurricane Sandy some four years ago, The Sandy Build it Back program embarked on a precedent-setting local hiring program.  Since then the program has created good, career-track jobs for low-income Sandy-impacted residents and also restored homes in many impacted neighborhoods. Today the program can serve as a model for community and labor groups coming together to help their city following a disaster. Our latest publication “Sandy Build it Back: Workers Rebuilding Their Own Communities” highlights the success and impact that this program has made to our communities.

The Path to Affordability & Good Jobs 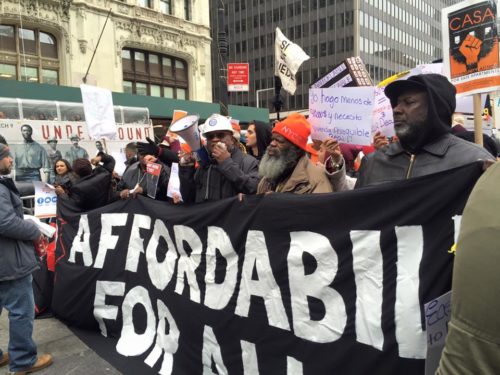 The Real Affordability For All (RAFA) campaign took a big step forward after months of organizing and advocacy this past year by getting the city to agree to study new mechanisms to ensure that Mandatory Inclusionary Housing will meet the affordability needs of neighborhoods set to be rezoned while creating good local jobs.

Power to the Public

Climate Works For All (CW4A) launched its second campaign, the Public Power Project, to demand changes to the City’s solar program on public buildings. This program will lead to a myriad of opportunities for working people and low-income communities including good local job creation, targeted installations that prioritize neighborhoods for climate investments, and energy savings that flow resources back into public institutions and programs in low-income communities.

New York as a Beacon of Climate Justice

Gearing up for the upcoming state legislative session, the NY Renews coalition–comprised of over 100 community and environmental justice organizations, businesses, faith institutions, labor unions, and environmental groups–has been busy organizing town halls, press conferences, and actions across New York State. In December, 350 people gathered at a town hall in New York City to talk about the impact of climate change and support the Climate and Community Protection Act (CCPA) to bring good jobs, healthy communities, and renewable energy to our state. This was followed by press conferences later that same month calling on Governor Cuomo to be a national leader on climate and include the CCPA in his 2017 proposed budget. The CCPA was passed in the State Assembly during the last legislative session.

An ALIGN Mainstay Rises to the Challenge 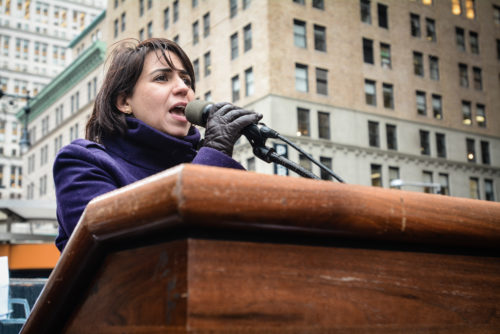 In October the ALIGN Board of Directors announced the unanimous election of Maritza Silva-Farrell to become ALIGN’s new Executive Director. Maritza officially assumed her post on November 1st, taking leadership of the organization after being with ALIGN for six years and leading many successful campaigns, from keeping NYC Walmart-free, to expanding homecare for low-income New Yorkers, to championing deeply affordable housing, and the creation of Universal Pre-K for New Yorkers. The election of Maritza was the culmination of a 4+ month transition plan that saw the ALIGN Board of Directors and members of the staff screen countless candidates and slowly shift responsibilities away from former Executive Director Matt Ryan. 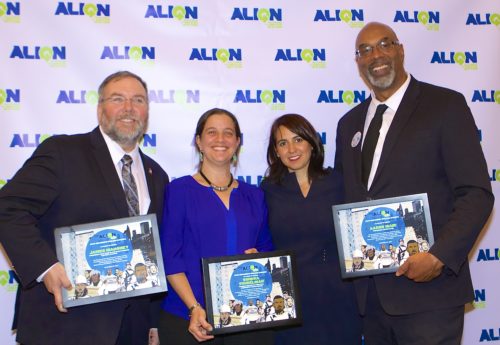 This past November ALIGN held its annual Movement Builders Awards where we honored President Aaron Mair of the Sierra Club, President James Mahoney of the New York State Iron Workers District Council, and Former Executive Director of Community Voices Heard (CVH) Sondra Youdelman. The awards are a time for where we recognize leaders who have been instrumental in building movements for a more equitable economy, accountable democracy, and sustainable environment for all New Yorkers. As such it only seemed fitting that the night also featured Maritza Silva-Farrell’s inaugural address as ALIGN’s Executive Director. Her remarks reflected a passion for our work, sincerity regarding the challenging times ahead for our movement, and hope that we can succeed with a renewed sense of unity given the altered political climate in the US. During her address the message became clear for the packed audience, we must and will stick together.

The MBAs is our most anticipated event every year. This year was no different as we were joined by close to 200 community and labor allies from New York City, State and throughout the country. Not only across the city of New York but from across the entire United States. Each honoree held the floor with speeches that captivated the audience and spoke about the action we must take with the looming changes our country is facing. During her time with CVH Sondra Youdelman and the organization battled the illusion of the “welfare queen” and although a new form of it seems to have returned, CVH is equipped to defeat it once again. James Mahoney opened his speech with a solemn moment of silence for a construction worker who died on a job site earlier in the week; going on to demand the need for safe job sites that protect the rights of workers. Aaron Mair took the stage with his father’s old union jacket (his father worked in an automobile factory for over 30 years) and rallied the audience not to stand idle as our environment is put in danger while good jobs are being cut around the nation. The consistent message in every speech was how each individual was able to build these movements, and that now more than ever our alliances must be united to combat the looming challenges we will face. Photos from the MBAs can be found here. 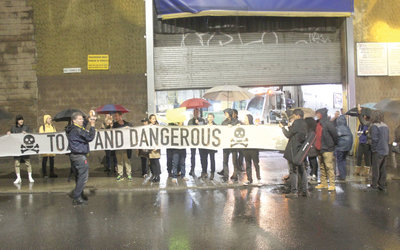 In November, ALIGN co-hosted a town hall with CleanUp North Brooklyn (CNB) to release a report called, “Profits Before Safety: The Impacts of a Privately Owned Transfer Station on a North Brooklyn Community.” CNB members collected video from local buildings and businesses earlier in the year and documented that Brooklyn Transfer station committed over 1,000 violations of regulatory code in seven days. These findings were met with personal stories from long-term residents of the neighborhood, where parents, business owners, and community members spoke about the environmental and safety issues they confront every day. One local resident who spoke, considered “The Mayor of Thames Street,” reflected on the dangers the transfer station presented to families and children in particular. 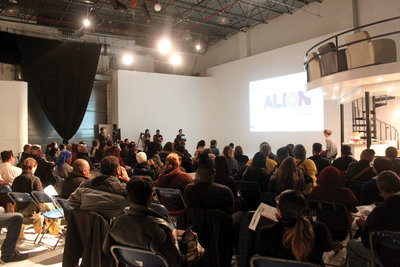 The city’s eventual shift to a zoned waste collection system for private haulers can bring both positive environmental and job impacts. ALIGN’s latest report co-authored by our Strategic Researcher, Jessica Quiason, Clean City, Green Jobs: How Smart Recycling Policies Can Build NYC’s Economy points to the job creation potential NYC has with a zoned collection system through increased commercial recycling rates. By increasing recycling rates to 70%, NYC can create 3,300 new jobs. Additionally, the reform could bring in substantial private investment into the recycling industry, helping the private sanitation industry catch up to the current standards of the public sector.

Moving forward TDT will remain focused on winning gains for communities and workers while the city moves through the consultation process for the zone design.