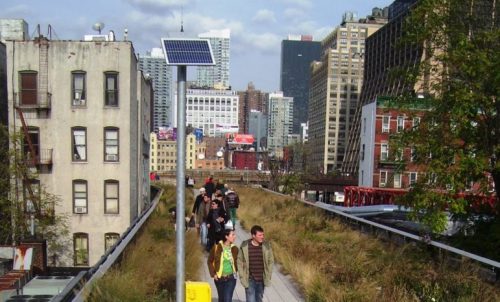 Workers, community members, and environmental advocates are joining forces to ensure our city’s big plans to address climate change don’t leave working people and communities behind. Two years after the historic People’s Climate March and as we approach the 4th anniversary of Hurricane Sandy, it is unmistakable that solving the dual problems of climate change and inequality is the only way to create a truly sustainable New York City.

As one part of its efforts to address climate change, the city committed to installing 100MW of solar on the rooftops of public buildings by 2025, and that work has already begun. We support a transition to renewable energy in New York City, but New Yorkers are asking: how do we, the people of New York, fit into this grand plan?

As the councilmember representing the 47th District, I know what it is to be devastated by both climate change and economic inequality. We saw communities like Coney Island get hit hard by Hurricane Sandy, and rebuilding hasn’t been easy. The Sandy recovery experiences of the people who live in Coney Island are worlds apart from the experiences of their more affluent neighbors in other parts of the city such as the Financial District. Before becoming a councilmember, I was a history and government teacher at New Utrecht High School in southern Brooklyn. I saw first-hand how members of my community and even some of my students continued to struggle after the storm. Part of what prompted me to run for public office was seeing the inequitable manner in which low-income areas like Coney Island were treated in the effort to rebuild after Sandy. In Coney Island, for example, schools are just now beginning to have their temporary boilers replaced. These enormous eyesores provide heat, but do not allow for temperatures to be appropriately adjusted, causing unbearable classroom conditions that impede learning outcomes.

Although the recovery has been rife with difficulties post-Sandy, one of the successes was the city’s commitment to rebuild with equity. Upon becoming a councilmember, I advocated diligently for local residents to be first in line for employment opportunities in the recovery process, because I believe residents in impacted communities should not just be witnesses to their recovery, but active participants in it as well. Together, we established a first-of-its-kind project labor agreement that required local hiring and workforce development programs to ensure the people from impacted communities were part of the workforce to rebuild our city. We believe that similar approaches should apply to all climate-related infrastructure projects, and our city’s public solar initiative is no exception. We are not just building physical resiliency; we must also build human resiliency. Environmental remediation and combatting climate change are incredibly important, but helping residents in communities that have suffered most as a result of environmental neglect needs to be a priority. We see an accountable public solar initiative as a significant opportunity to address a number of the challenges facing our communities.

Solar installations on hundreds of public buildings by 2025 mean that in less than 10 years, we will need thousands of skilled solar workers. And that’s important for a Sandy-impacted neighborhood like Coney Island, where the unemployment rate is 16 percent and the poverty rate is 30 percent, as opposed to national rates of 6 percent and 15 percent respectively. Based on a white paper report released by the Climate Works for All coalition, “Restart Solar: How NYC Can Renew Its Solar Program To Benefit Workers & Community,” the city’s public solar projects should be creating nearly 4,000 jobs over the next 9 years.

This is the future. A skilled solar workforce will be needed to assess solar capacity, design the systems, and install and maintain thousands upon thousands of solar panels all over the city.

However, will we create good career-track jobs, or will we be left with short-term, low-wage, project-based work? And how will local residents, particularly from low-income communities, get recruited and trained for these jobs? What New Yorkers need is a climate plan that establishes high quality job standards and a strong workforce development system that will deal with unemployment and poverty in so many of our communities.

In addition, using solar energy in our public buildings means saving money. This past fiscal year, the city had to budget $744 million of public funds to pay for heat, light and power in city buildings, and a staggering $220 million of that budget went to paying for utilities in public schools. Could you imagine what just a portion of that money would mean for so many of our schools?

Finally, it’s not just about sharing the savings with communities in need. We need to make sure that the city’s outsourcing of this public infrastructure work to private solar developers is not again putting profits before people. By maximizing our savings from solar power and freeing up millions of dollars in the budget, it means we can do more to invest in people and create equity in our great city.

The time is now to address poverty and inequality in our city as we move towards a renewable energy future.

Mark Treyger is a Democratic New York City Councilmember representing the 47th District. Daisy Chung is the campaign director of ALIGN and coordinator of the Climate Works for All Coalition

Category: In the NewsMark Treyger and Daisy Chung