Just what every flash mob needs: A stiltwalker, a drag queen and a catchy song.

As you can see from the video below, a recent protest against Walmart, which protesters say mistreats gays, minorities and female workers, had all three. The big box chain, which is pushing to make a foray into NYC, denies that's the case, of course, and says its stores help jumpstart lagging local economies.

A bevy of elected officials are also on Mayor Bloomberg's tail to come out against Walmart because of its push to make more money off guns and ammo. Update: A Walmart rep responds, "Walmart will not sell firearms in any future New York City store.  We’re proud of our participation in 'Mayors Against Illegal Guns' and will remain committed to the safe and responsible sale of firearms in areas of the country where they are sold." 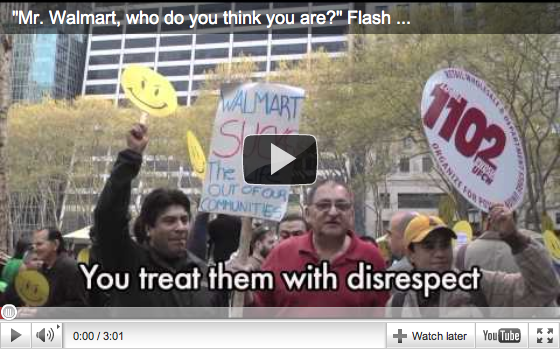 Category: In the News