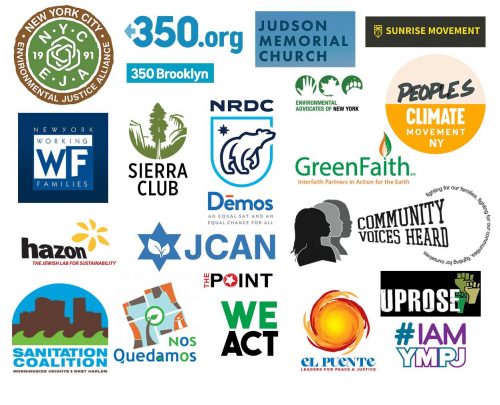 “Our city and our planet are facing a climate crisis that demands action,” the organizations wrote to city leaders. “The current commercial waste disposal system is a significant contributor to New York City’s global warming emissions … New York City must do all it can to confront the climate emergency and half measures are not acceptable. We urge you to work diligently to enact exclusive commercial waste zones (Intro. 1574) this fall.”

Currently, over 90 different sanitation companies criss-cross the city every night picking up trash from local businesses. More than 50 different companies can service the same neighborhood. The Commercial Waste Zones bill would assign one carter to each section of the city, cutting diesel garbage truck traffic by 58%, the equivalent of 37 trips to the moon and back every year.

Only about a quarter of commercial waste is recycled in New York City, and just 1% is composted, far below the rates of leading green cities. When food and other organic waste is dumped in landfills, it produces methane, a very potent global warming gas. The greater efficiency of zoned-waste collection would allow carters to invest in state-of-the-art recycling facilities and zero emission trucks. The policy would also make recycling and compost collection available to every business in the city. Businesses would receive discounted rates for increasing their recycling and for implementing waste reduction measures such as donating edible food.

If New York City increased its recycling and composting rates to match other cities with exclusive commercial waste zone systems, it would avoid up to two million tons of annual greenhouse gas emissions, according to a report by Transform Don’t Trash NYC. This is a reduction equivalent to removing one in five cars from New York City streets.

The Commercial Waste Zones bill was introduced by Council Member Antonio Reynoso in May, and is cosponsored by Speaker Johnson and a total of 23 Council Members. Advocates are urging the Council to bring the bill to a vote.

“Accessible and efficient waste disposal methods will be a critical part of a Green New Deal,” said Georgia Wright, a New York City member of Sunrise Movement. “Passing the Commercial Waste Zones bill will demonstrate New York City’s unflinching commitment to a greener, cleaner future for all its residents.”

“As world leaders gather at the United Nations to discuss the climate crisis, right here in New York City there is much that City officials can do to cut global warming emissions and slash localized air pollution.  Legislation to create exclusive commercial waste zones, as the  city’s own study shows, offers the best opportunity in decades to curb pollution from the private carting industry,” said Eric A. Goldstein, NYC Environment Director at the Natural Resources Defense Council.

“The climate crisis affects us all and clearly the urgency for bold solutions is growing,” said Sabeel Rahman, President of Demos. “It is inescapable. But the fossil fuel dependency and profiteering that is driving climate change does not affect us all in the same way or to the same degree. Inequitable exposure to the most harmful transportation emissions, particularly from diesel trucks that clog the streets of communities of color, is an all too prevalent case in point. Intro 1574, the commercial waste zoning bill before New York City Council, is a bold and workable response that puts the most impacted communities at the center of a much needed and well-targeted climate solution; it is also a great example of the kind of local visioning and policy design we need to meet the climate goals and equity standards recently established statewide with passage of the Climate Leadership and Community Protection Act. It should inspire decisive action by the New York City Council as soon as possible.”

“Low income communities and communities of color are at the frontlines of the climate crisis, despite not being directly responsible for the excess waste generation, poor materials separation, and unnecessary fossil-fuel based waste truck mileage, which have contributed heavily to our arrival at this point. Now, it is our collective responsibility to take action and to pass legislation that does not take half measures, to curb a global shift that will affect every living being on the planet. For NYC, passing Intro 1574 is the next major step on that agenda,” said Dr. Tok Oyewole of New York City Environmental Justice Alliance.

“We need to do more to clean up our act when it comes to climate. Establishing commercial waste zones is an innovative approach that will both reduce dirty tailpipe emissions and improve public health. The City Council should pass this bill immediately,” said Conor Bambrick, Air & Energy Director for Environmental Advocates of New York.

“In the wake of the climate crisis, it is particularly critical that the City of New York move away from harmful and extractive practices and transition to a new method of commercial waste collection that zones and regulates the system and reduces the millions of vehicles miles traveled by commercial waste haulers every year. We know that a more regulated system will greatly reduce particulate matter and other ground-level pollution. In a community like Hunts Point, which is ranked one of the highest on the NYC climate vulnerability index, and a community that hosts the second-largest concentration of the waste transfer stations, this is a matter of life and death. We are calling on our leaders, The Department of Sanitation, and The Mayor to take action now,” said Angela Tovar of THE POINT CDC.

“At the Jewish Climate Action Network NYC we stand for climate action that is urgent and just,” said Wendy Seligson, a Jewish Climate Action Network NYC Steering Committee member. “Our tradition teaches us that it is our obligation to care for the earth and its people.   Intro 1574, supported by the Transform Don’t Trash coalition, embodies this by dramatically reducing emissions and improving air quality, especially in communities that have suffered too long as a result of air pollution caused by excessive truck traffic.”