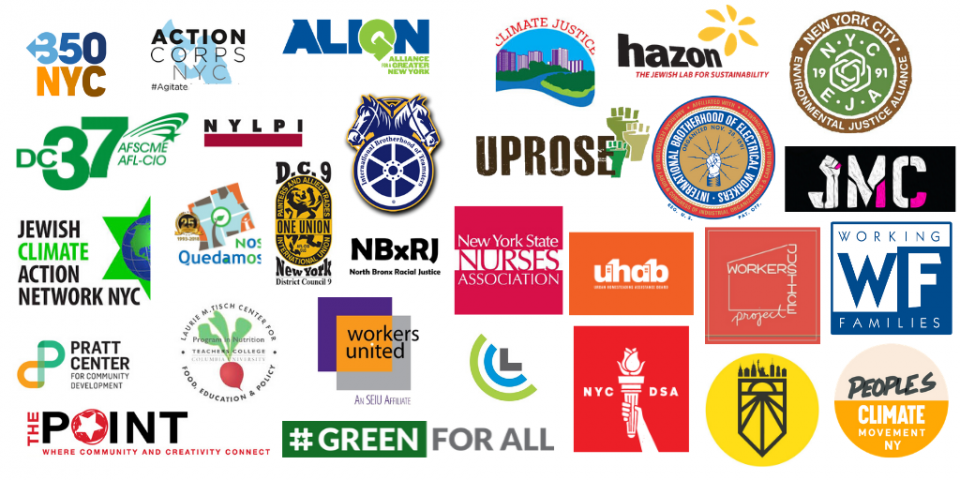 We are in the midst of a climate crisis and immediate action is necessary to protect the future of our City and our planet. As you noted while announcing the passage Local Law 97 “There’s no time to waste. We’re taking action now, before it’s too late.” The City budget is an opportunity to fund and move priority work, it is a moral statement, and it can be a moment to define your legacy and the impact you have and will continue to have on New York City and our world. However, without a true monetary commitment to implementing the Dirty Building’s Law, and ensuring all New Yorkers benefit from it, this opportunity will be lost. The Climate Works for All coalition and our allies urge the City to prioritize our most vulnerable communities and invest in our collective future by providing a significant budgetary pledge for the implementation of Local Law 97, as well as renewable energy generation and transmission.  These investments must be grounded in a commitment to Environmental Justice and a Just Transition. The time is now for New York City to take bolder action by funding the fight against Climate Change via a strong commitment in the budget.

A budget commitment must include the following components:

Invest at least $1 billion per year for the next 10 years to improve energy efficiency and reduce emissions in rent-regulated, low-income, public, and affordable housing to move these buildings to mirror the emissions reductions set by Local Law 97.

This funding will cover energy efficiency upgrades beyond the measures mandated in LL97 in targeted rent-regulated and affordable housing developments in each City Council District across all five boroughs.These retrofits would improve the living conditions and reduce the energy burden for New Yorkers who otherwise would not see these investments in their homes and neighborhoods while ensuring that rental increases are avoided.

Under this program, the City will convene community members within each City Council District to prioritize areas for retrofit investment using a set of criteria (e.g.,income, air quality, energy burdened, climate vulnerability, and other related factors). Environmental Justice communities and historically disinvested Council Districts should be prioritized within funding distribution. The program will allocate specific sums according to needs and historic disinvestment following the principles of equity. The City should work with existing models of  pre-apprenticeship and job training programs for community members to be brought into the economic development generated through the retrofit projects. The program must also create 100% quality, union jobs with high labor standards attached in the energy efficiency sector each year.

The funds generated through this city bond program will be directed toward the development of city and community projects that can generate at least 1,000MW of clean, renewable energy within the next 5 years in Zone J. The funds will also go towards transforming and expanding New York City’s dilapidated and inefficient energy grid and facilitate the retirement of our dirtiest power sources.

Further discussion about the implementation of both of these items (funding for energy efficient upgrades in buildings exempted from Local Law 97 and the “green” bond) is needed and Climate Works for All is prepared to work closely with the City to move all of this forward.

The Climate Works for All coalition requests additional funding be allocated to various City agencies tasked with executing the implementation of LL97 in order to ensure these agencies are sufficiently staffed by city employees for oversight and enforcement and have the resources needed to carry out the mandate.

Each of these investments will allow New York City to take critical, timely action to fight climate change, meet our City’s emissions reductions goals, and create thousands of good quality union jobs in our communities. We ask that you make a public commitment to these financial investments and to partnering with the Climate Works for All coalition in the development of these investments in your upcoming budget address on January 17th.  We look forward to future discussions with your office surrounding these requests.

The Climate Works for All coalition and Allies

ALIGN- The Alliance for a Greater New York