Climate Works for All:

Read more about the coalition at nyclimateworks.org

Climate change continues to have severe and long-term effects on New York City residents. Although all New Yorkers will be impacted, low-income communities of color will disproportionately shoulder the burdens created by this crisis. These communities sit at a nexus of physical, political, and economic forces that leave them most vulnerable to impacts of climate change as well as economic instability and job loss.

After the 2014 People’s Climate March,  community groups, environmental justice organizations, labor unions and other allied advocates joined together to form the Climate Works For All coalition. Our first report, Climate Works for All: A Platform for Reducing Emissions, Protecting Our Communities, and Creating Good Jobs for New Yorkers, details ten proposals to make our city more resilient, create nearly 40,000 good jobs each year, and cut our annual greenhouse gas emissions by nearly 12 million metric tons of carbon equivalent. We are holding the Mayor and City Council accountable for meeting the goal of reducing greenhouse gas emissions by 80% by 2050, achieving zero waste to landfills by 2030, and installing 100 megawatts of renewable energy on public buildings by 2025. 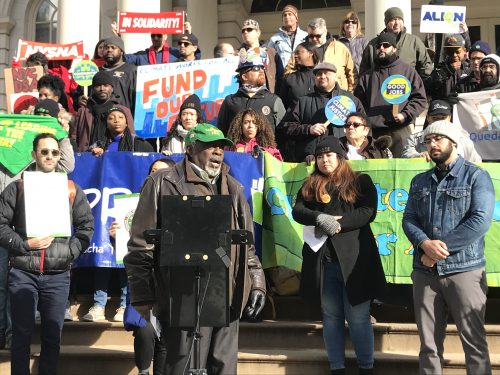 New York City public schools were among the institutions hit hardest by COVID, especially for our frontline Black and brown students and their families. These are the same communities that are ingesting toxic air and water, suffering from heat waves, and vulnerable to the next big storm. We owe it to New York’s more than 1.1 million students, teachers, staff, and their communities to provide clean air in schools and create more resilient communities that will withstand the next pandemic, or catastrophic climate event.

That is why ALIGN’s Climate Works for all Coalition is urging the City for a strong implementation on solar and HVACs for green, healthy schools. We released a report, Creating Green, Healthy Schools: An Equitable Action Plan for the Next Mayor of New York City, which lays out a plan for our City to build a sustainable future for our children and our communities. This work continues the previously won commitments for strong labor standards as New York City installs solar panels on public buildings, as well as a process for prioritizing installation in neighborhoods most impacted by climate change. There are a total of 88 sites to have new solar panels installed, using union labor. Our support for the Project Labor Agreements underlined in the City’s Community Hiring economic justice plan will ensure that climate infrastructure will be built through career unions jobs and by the New Yorkers most impacted by Covid and climate change.

Reducing City’s contribution to GHG emissions, while improving indoor and outdoor air quality for frontline communities will have consequential positive health outcomes and save lives. Installing solar and air control systems like HVAC in public schools will allow NYC to foster more resilient neighborhoods and ensure the benefits of renewable energy reach low-income New Yorkers of color who are most impacted by COVID and the climate crisis. By installing HVAC systems and siting solar on public schools, the City can create good green jobs, fight climate change, and ensure an equitable recovery for all.

A Green Jobs Recovery for a Post-COVID19 Economy:  The Climate and Community Stimulus Platform

Today, we face an unprecedented jobs crisis due to the devastating effects of COVID-19. As New York begins to re-open the economy, the chief concern for many New Yorkers is whether  they will have jobs to go back to. With over 40 million filing for unemployment across the nation a higher rate than at any point since the Great Depression, New York City has the 4th highest job loss in the country. At the same time, the climate crisis has not abated, and while New York City has put into place bold climate goals to reach an 80% reduction in emissions by 2050, the focus has waned on this critical issue.

With the dual jobs and climate crisis at hand, the coalition proposes that climate solutions can create immediate and direct opportunities for coming out of an economic collapse, but only if there is large-scale, coordinated citywide action rooted in equity. Climate Works for All is creating political and grassroots momentum around a green infrastructure and climate  jobs plan that addresses how our communities, especially frontline communities, can recover from an unprecedented economic crisis by building a resilient New York. The coalition has outlined their demands for a green jobs recovery on a  Climate and Community Stimulus Platform. In our recent report, An Equitable Recovery: creating 100,000 climate jobs for frontline communities of color, the coalition outlines 7 different infrastructure project areas where, if the city invests 16 billion dollars over 3 years, we can put 100,000 workers back to work in good, union, climate jobs and invest in New York’s Black and brown communities.

After 5 years of organizing, the Climate Works for All coalition achieved a historic climate victory with the passage of the Dirty Buildings legislation in April 2019. This new bill, now Local Law 97, will require large buildings over 25,000 square feet to cut emissions by 40% by 2030 and 80% by 2050. With buildings responsible for 70% of New York City’s emissions, this world-first legislation will have the single most significant impact on reductions to the city’s climate pollution to date, and will be a critical path to mitigate the threat of climate change in the most vulnerable communities. It will also lead to the creation of over 20,000 direct jobs each year to implement building energy efficiency upgrades and improvements. With our labor partners, we are working to ensure that these jobs are accessible to low-income workers of color and women through targeted recruitment, training, and hiring.

Most recently, we celebrated the expansion of Local Law 97 via intro 1947 to include affordable housing buildings where state law protects tenants from rent increases from retrofits.