Sarita Gupta and Erica Smiley, authors of The Future We Need 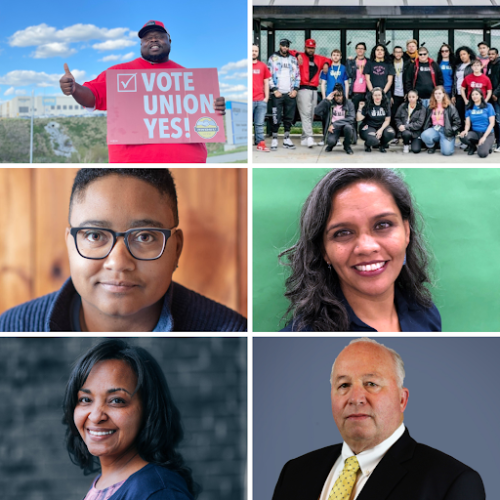 New York (August 16, 2022) – ALIGN is pleased to announce the recipients of its 2022 Movement Builder Awards (MBAs), annually recognizing leaders in social, economic, and environmental justice who make New York a national model for progress. This year’s ceremony will celebrate the wave of worker and climate organizing sweeping the nation, honoring Amazon workers from New York to Alabama who have stood up to corporate abuse, including the Amazon Labor Union and RWDSU BAmazon Union; Sarita Gupta and Erica Smiley, authors of The Future We Need, a new book that envisions the future of labor organizing; and climate leaders James Shillitto, President of the Utility Workers Union of America (UWUA) Local 1-2, and Rahwa Ghirmatzion, Executive Director of PUSH Buffalo, whose work blazes a trail for our renewable energy economy and a just transition for workers.

The event will be held on Wednesday, September 28 at the IBEW Electrical Industry Training Center in Long Island City, NY.

“Together, the 2022 honorees demonstrate the breadth of our work, the urgency of our intersecting crises, and the strength of our growing movement,” said Maritza Silva-Farrell, Executive Director of ALIGN. “We are bearing witness to a swelling wave of labor organizing, with workers across the country banding together to unionize their workplaces and fight for better conditions. ALIGN is paying special tribute to Amazon workers who have challenged the corporate behemoth against all odds. Amazon has built its monopoly power by putting profit over people with a brazen disregard for health and safety, but workers are fighting back, first taking on the company in Alabama, then winning the first unionized Amazon warehouse in New York and organizing for more victories nationwide. ALIGN was proud to bolster this movement by passing the Warehouse Worker Protection Act, bringing transparency to warehouse quotas and ensuring workers know their rights.

“We’re also proud to recognize Sarita Gupta and Erica Smiley, whose visionary book tracks the expansion and evolution of the labor movement and imagines a future for collective bargaining that meets the needs of our moment. And finally, we are thrilled to honor Rahwa Ghirmatzion, who has brought solar power and clean energy jobs to communities of color in Buffalo, and James Shillitto for his leadership in the just transition to a clean energy economy; their work mobilizing workers and their families around green infrastructure and climate jobs demonstrates that when we organize, we can combat climate change and build the sustainable future we need.”

All proceeds from the Movement Builders Awards benefit ALIGN in its nonprofit mission to address the root causes of economic injustice by forging strategic coalitions and developing policy solutions that make an impact. Tickets are available now; for more information about sponsorship, please contact Nina Terhune at nina@alignny.org.

Amazon Labor Union
The Amazon Labor Union (ALU) is an independent, worker-led union specifically for Amazon workers. The ALU was created by TCOEW, The Congress of Essential Workers, after the infamous walkout to protest unsafe working conditions that was held on March 30, 2020 at JFK8 in Staten Island, NY. On April 20, 2021 the ALU launched their campaign passing out ALU t-shirts and union literature, inside and outside the facility and building their own worker-led movement from inside JFK8. In late December 2021, JFK8 filed for a petition with the required 30 percent of authorization cards signed by workers at JFK8. The official in-person election was held March 25–30 giving all tier 1 and tier 3 workers the opportunity to vote yes or no to have the ALU collectively bargain a contract. On April 1, 2022, the Amazon workers at the JFK8 warehouse in Staten Island, backed by the ALU, became the first unionized Amazon workers recognized by the National Labor Relations Board in the United States.

RWDSU BAmazon Union
The RWDSU BAmazon Union campaign is the historic undertaking to bring a union voice to over 6,000 workers at the Amazon distribution center in Bessemer, Alabama. The workers there are standing up to one of the most powerful corporations on the planet. They are intent on improving their working conditions and fighting back against an employer that monitors them so closely that many are afraid to take bathroom breaks. The results of the first election were thrown out by the NLRB owing to Amazon’s outrageous and illegal behavior, and the results of the second are still considered too close to call. Regardless of the results, these Amazon workers and their campaign with the RWDSU has ignited a match that has the entire labor movement on fire, opening the door to further organizing across America at Amazon and elsewhere. Workers everywhere now understand that if they can stand up to Amazon with all its money and power, they can organize anywhere for better jobs and better lives.

Rahwa Ghirmatzion
Rahwa Ghirmatzion is the executive director of PUSH Buffalo, a community organization that works at the grassroots to create and implement a comprehensive revitalization plan for Buffalo’s West Side, with more than $80 million invested in affordable housing rehabilitation, solar installation, green jobs training, weatherization, and green infrastructure. Over the last decade, PUSH has built a powerful, grassroots movement guided by racial, economic, and environmental justice rooted in the realities of poor and working-class people living in Buffalo. The benefits of PUSH’s organizing model extend far beyond the boundaries of our Green Development Zone on Buffalo’s West Side, a place where we practice our values through action and what it means to have a Just Transition to a regenerative and renewable economy. She serves on the New York State Climate Justice Working Group, a group created by New York’s 2019 climate law to identify disadvantaged communities on the front lines of climate change that will be a focus for state climate investment.

Sarita Gupta
Sarita Gupta is Vice President of U.S. Programs at the Ford Foundation, overseeing domestic work including Civic Engagement and Government, Creativity and Free Expression, Future of Work(ers), Technology and Society, Disability Rights, and Gender, Racial, and Ethnic Justice. Gupta joined the foundation in 2019 as director of the Future of Work(ers) program, bringing more than two decades of experience working to expand people’s ability to take collective action to improve their workplaces, communities, and lives by creating meaningful solutions. Gupta previously served as executive director of Jobs With Justice, where she led a network of 30+ labor and community coalitions that changed the conversation; and was also co-director of Caring Across Generations, a national movement transforming the way America defines care so all families can live well and age with dignity. She is a nationally recognized expert on the economic, labor, and political issues affecting workers, and is widely acknowledged as a key leader and strategist for building coalitions and policies that protect, and advance the rights of workers. Gupta earned a Bachelor of Arts from Mount Holyoke College, with studies in women, health, and society.

James Shillitto
James Shillitto is President of Utility Workers Union of America Local 1-2, and Regional National Executive Board Member Of Utility Workers Union Of America. The Utility Workers Union of America represents a membership of 50,000 utility workers in municipal and publicly-traded utilities, with over 7,000 members working in New York State in the electric, gas, steam, water, and nuclear industries. Shillitto has been a utility worker for 44 years—30 as a high voltage lineman for Con Edison and 14 as a union officer, from Business Agent to President. Shillitto also serves on the Clean Energy Jobs Coalition and the Just Transition Working Group for the Climate Action Council.

Erica Smiley
Erica Smiley is the executive director of Jobs With Justice. A long-time organizer and movement leader, she has been spearheading strategic organizing and policy interventions for Jobs With Justice for nearly 15 years. Prior to taking up her current position with the organization, Smiley served as organizing director for Jobs With Justice developing campaigns that resulted in transformative changes to how working people organize and are civically engaged at their workplaces and in their communities. During her tenure at Jobs With Justice, Smiley has served in numerous leadership capacities including as campaigns director and as senior field organizer for the southern region. Smiley is originally from Greensboro, N.C. where she is a proud product of public schools. She currently resides in New Jersey alongside her partner and daughter.

About ALIGN
ALIGN (Alliance for a Greater New York) is a longstanding alliance of labor and community organizations united for a just and sustainable New York. ALIGN works at the intersection of economy, environment, and equity to make change and build movement. Our model addresses the root causes of economic injustice by forging strategic coalitions, shaping the public debate through strategic communications, and developing policy solutions that make an impact.