On October 16th 2017, ALIGN and over 25 community organizations across New York City and State sent letters to Governor Cuomo and Mayor de Blasio calling on them to stop rolling out the red carpet for Amazon’s expansion in New York.

Read the letter to de Blasio

Read the letter to Cuomo

NYC is one of many cities across North America vying for Amazon’s second headquarters.  The letters emphasize that city and state government should not give Amazon any taxpayer-funded financial incentives as the retail giant eyes a massive expansion in New York.  We are calling on our city and state government to hold Amazon to higher standards for how it treats workers and communities as it seeks to expand its operations here.

The letters were unveiled at a press conference outside City Hall. 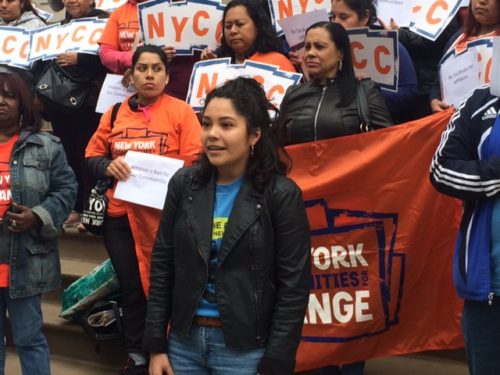 Cathy from Make the Road NY addresses the media – billion dollar companies like Amazon should not receive subsidies.